My Story: A Sinner Saved By Grace 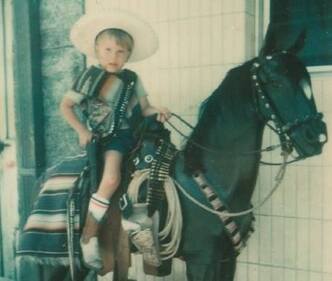 Me (on a horse in Mexico)
Growing up
I was born in central Florida in the early 1970's. I lived in the country on what could be considered a farm. We had a large garden and several kinds of animals, from small to large (cats, dogs, ducks, chickens, pigs, cows, goats, horses, etc., and oh, a pet goose). My childhood days were spent exploring the woods, climbing trees, building forts, swimming in the creek (and hopefully not getting bit by a snake or eaten by an alligator), fishing, shooting b.b./pellet guns, knocking down wasp nests (and running like crazy), burning ants with a magnifying glass, killing insects and small rodents (sorry PETA), catching frogs and lizards. I also spent a lot of fun time riding my bike and skateboard. One of my favorite things to do outside was swimming, whether in the neighbor's pool or at the beach. While most of my time was spent outdoors, I also enjoyed time indoors playing with my toys, video games and watching cartoons. 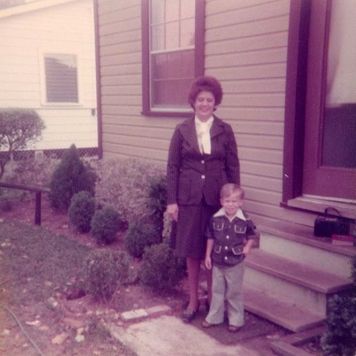 Mom and me (all dressed up for church)
Church
I do not remember attending church as a child though I guess I must have because I had two or three certificates for perfect attendance at vacation Bible school. Apparently, I went to church faithfully at least two or three summers in a row, though I do not remember. My first memory of attending church is as a young teenager after I was invited by a neighborhood friend. But then (as a teenager) only once and twice again when I was twenty years old: once before I joined the Navy to please my fiancé (more so her parents) and once while in Navy boot camp in order to get out of barracks duty on a Sunday morning. 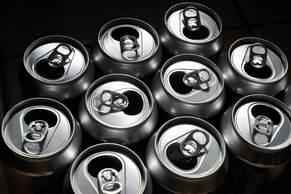 Beer cans
Lost Boy
As a teenager in the late eighties/early nineties, I was a part of the MTV, Beverly Hills 90210 generation. My influences were not good to say the least. I started drinking at an early age (unbeknownst to my parents), around fifteen or sixteen years old, in order to "fit in" and "be cool." I really leaned into the whole Beastie Boys get drunk and party, rebel against authority mentality. I got mixed up with the wrong crowd; fighting, drinking and thieving became my lifestyle. When I was seventeen, I ran away from home. I ended up flunking out of high school and getting my G.E.D. (General Education Diploma) instead. After that, I got engaged to my "first love," but when that relationship ended abruptly a couple of years later, I became very depressed and wanted to end my life. I decided to join the Navy instead. What seemed like a good idea at the time, I soon regretted. 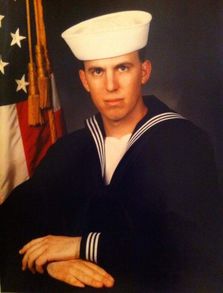 Navy bootcamp photo (dress blues)
The Navy
I can't say that I really liked the Navy, actually the opposite was true. And I wish that I could say that I left my drinking days behind me once I joined the Navy, but sadly I was surrounded by an environment that almost encouraged drinking. The idea that sailors like to drink (cuss and get tattoos) is true. I was drunk almost every weekend. I didn't think it was a problem until I got arrested a couple of times while intoxicated, once in Mexico and then again in Chicago. That led to disciplinary action and problems with my superiors. I resented their authority in my life. I rebelled. I wanted to do things my way, not theirs. I was hoping for the day when my time of military service was up. 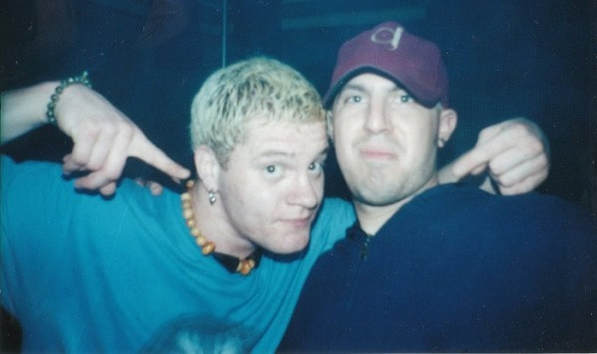 Jon (friend) and me (at a rave party)
The Rave Scene
While I was stationed in Chicago, I met a fellow shipmate who introduced me to the underground rave scene. I fell in love with the music and the people. I started going to raves every weekend and really began immersing myself in the rave culture. It changed everything about me: the music that I listened to, the way that I dressed and my whole philosophy of life. I even stopped getting drunk (for the most part). I prided myself that I was not like those "other sailors" who liked to get drunk all the time. The problem was that I replaced alcohol with substances of the more "recreational kind." This only added to my depression. 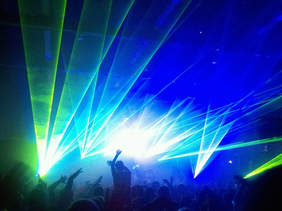 Rave
Temporary Happiness
​I was only happy in the moment. I was the "life of the party" the night of and the morning after a rave, but I was depressed the day after and in the days to follow (at least until the next weekend rolled around). I lived for the weekends. It got to the point where I was only happy if I was at a party. Nothing could keep me away; not school, my job, or lack of sleep. I became focused on one thing and that was having a "good time." I became irresponsible and I made many foolish decisions as a result. 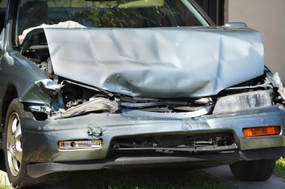 Wrecked car
The Accident
After having been honorably discharged from the Navy three years prior (a dream come true), I celebrated my "golden birthday" at a local club in Chicago. As I emerged from the club in a drunken stupor and barely having found my way to my car, I got into my car and drove off. CRAAAAAAASH!!!!!! While not seriously injured (by the grace of God), this accident would change my life FOREVER! 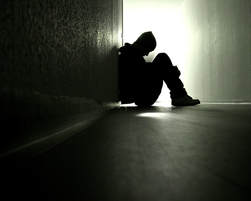 Depressed guy
Empty Life
I felt empty inside, like there was a void in my life. My life seemed purposeless. After the car accident, I started to think: Man, what if I had died? I don't know that I would be going to any place good? I think that I would have ended up in hell! That scared me and motivated me to read the New Testament Bible that the Gideons had given all of the sailors in boot camp. I can't even remember what passages I read. All I know is that God was speaking to me through this book. 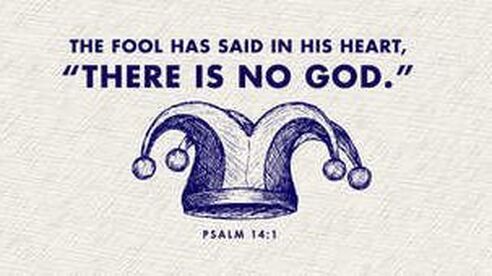 The fool (MyBible.com)
​Willful Rejection & Rebellion
For most of my life, I willingly rejected God's existence. Not only did I willingly reject God, but I wanted to have nothing to do with those who claimed to be Christians. I remember a friend telling me that she had started going to church and I got rather upset with her. I said, "If you keep going, then I can't be friends with you!" But in my current state of brokenness, I was now humble enough to acknowledge the God that I already knew existed. But it was also way more than just acknowledging God's existence, I was now giving up the control of my life to God. I messed up my life big time! I was finally ready for God to take it over! 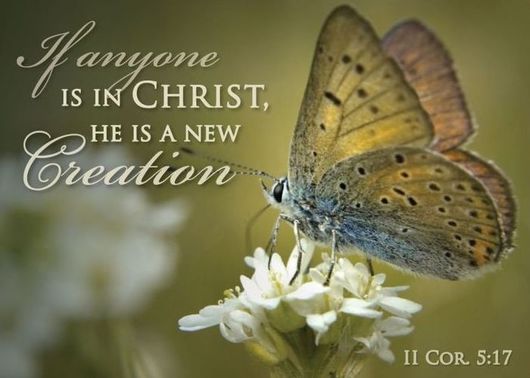 Butterfly
New Life, Eternal Life
​I felt like a brand new person and in fact I was -- a new creation! "Therefore, if anyone is in Christ, he is a new creation; old things have passed away; behold, all things have become new" (2 Cor 5:17). I had been born again! Everything that I had been searching for all my life and I finally found it (or rather God, not it, found me)! The emptiness inside me that I was trying to fill with things of the world was finally filled with the love of God! Because of all the sinful choices that I made in life, I felt like I was not worthy enough to be accepted by God. And in fact I wasn't worthy enough! I had absolutely nothing to offer Him except my sins, but He accepted me anyways! 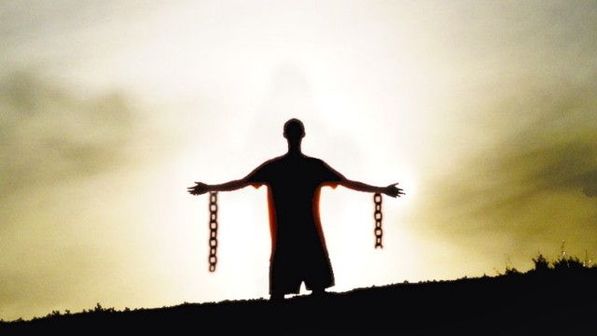 Man in broken chains
​Forgiven and Set Free
I thought that God could never forgive a wretched sinner like me! But because of the sacrifice of His Son, the Lord Jesus, taking the punishment for my sin on that cross upon Himself, (not because of anything good that I had done) all my shame and guilt had been washed away! I felt like the weight of the world had been lifted off my shoulders! All that sin and shame that I had been dragging around with me all my life was finally gone! Oh, to be forgiven and set free! What a glorious day that I shall never forget!
​
"Therefore if the Son makes you free, you shall be free indeed." (John 8:36)
See: JESUS CAME TO SET THE CAPTIVE FREE! 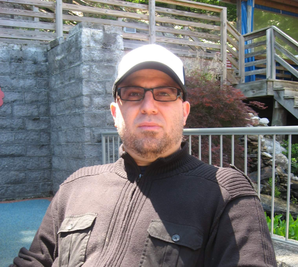 A very happy me on vacation in Chattanooga, Tennessee
I Died, was Buried, and Raised to New Life with Jesus Christ.

"Therefore we were buried with Him through baptism into death, that just as Christ was raised from the dead by the glory of the Father, even so we also should walk in newness of life" (Romans 6:4).

"I have been crucified with Christ; it is no longer I who live, but Christ lives in me; and the life which I now live in the flesh I live by faith in the Son of God, who loved me and gave Himself for me" (Galations 2:20).
The following is a video (and audio) of my baptism. It is important to note that water baptism is only for the believer in Christ -- the one who has come to a saving faith in Jesus Christ by repentance toward God and trusting in Christ and His finished work on the cross. Saving faith always precedes water baptism. Baptism does not save! The Bible clearly teaches that we are saved by grace through faith in Jesus Christ (Ephesians 2:8-9). That having been said, the Lord has commanded all believing Christians everywhere to be baptized. "Go therefore and make disciples of all the nations, baptizing them in the name of the Father and of the Son and of the Holy Spirit" (Matthew 28:19).
My Baptism (video)

My BaptismPosted by ONE WAY JESUS on Tuesday, August 25, 2015